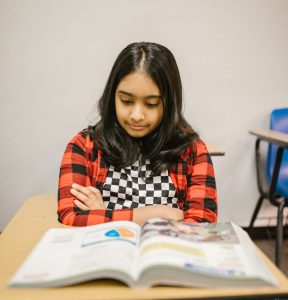 Up to 20 percent of public school students are served under the Individuals with Disabilities Education Act, but only 7 percent of Asian Americans are, the lowest of any group.

As a child, bestselling author Helen Hoang found socializing difficult and often felt lonely. When she was diagnosed with autism spectrum disorder at age 34, some of her life challenges finally made sense.

“My parents worked long hours when I was a child, leaving my grandma to raise me, my siblings and many cousins in a distracted manner, so whatever autistic traits I exhibited went mostly unnoticed,” she told NBC Asian America.

Her latest novel, the contemporary romance “The Heart Principle,” features a protagonist with autism and mental health issues. Hoang said her family’s lack of awareness of autism and being pressured to conform from a young age contributed to her becoming an expert at masking — the process of someone hiding their austistic traits — and not being diagnosed until later in life.

As millions of children are back in school, up to 20 percent of public school students are being served under the Individuals with Disabilities Education Act (IDEA). But when data is disaggregated by race, only 7 percent of Asian American children — the lowest of any racial group — are served.

Experts say a combination of factors, including shame, socioeconomics, cultural barriers, confusion about what constitutes a disability, the model minority myth and a reluctance to identify as being disabled have led to Asian Americans being underrepresented in the disability community. According to the U.S. Census Bureau, around 1.4 million Asian American and Pacific Islanders self-identify as being disabled.

“The fact that there’s this underrepresentation in the context of disability is multifaceted,” said Rooshey Hasnain, a disability researcher and the project director of Asians with Disabilities Outreach Project Think-Tank, or ADOPT.

In her research, she has found that disabled Asian Americans are underserved and receive lower-quality support and rehabilitation compared to other groups, including Latinos and Blacks. And a lack of Asian-specific research fails to address a diverse community of 22 million people who trace their roots to more than 20 different countries.

“A lot of it is intergenerational, it’s terminology and how disability is viewed in terms of that individual and that family and what community they come from,” she said. “The level of complexity becomes quite interwoven and there’s no one explanation to the reality of this lack of focus or funding, this underrepresentation or misrepresentation of Asian Americans.”

Advocates say that disabled Asian Americans are often overlooked, misunderstood and simplified, not only from outside the community, but also from within. People’s education, upbringing, culture and religious and spiritual ties all play a role in how they view disability.

“Asian families tend to believe that children can power through their learning problems by ‘working harder,’ as that was my belief as well for a long time,” said Ann Hu, whose daughter Michelle’s own dyslexia journey inspired her latest film, “Confetti.”

“Seeing how Michelle struggled in the classroom and struggled to finish her homework after school between 3 p.m. and 11 p.m. every day was truly a heartbreaking experience for me. Often Michelle would pretend that she understood the question just to help me feel less stressed.”

Groups such as Asians and Pacific Islanders with Disabilities of California (APIDC), the Disability Visibility Project, ADOPT and Diversability offer disabled Asian Americans and their families much-needed support and resources, as well as the space to share their lived experiences.

Excerpted from “Why Asian American Kids Are Under-Diagnosed When It Comes to Learning Disabilities” on NBC News. Read the full article online.