What It’s Like to Get an Autism Diagnosis After Years of Being Called Difficult, Dramatic and Lazy 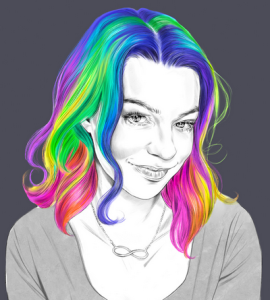 During the first thirty years of her life, comedy script writer Sara Gibbs had been labeled a lot of things – a cry baby, a scaredy cat, a spoiled brat, a weirdo, a show off – but more than anything else, she’d been called a Drama Queen. Little did Sara know that, at the age of thirty, she would be given one more label that would change her life’s trajectory forever. That one day, sitting next to her husband in a clinical psychologist’s office, she would learn that she had never been a drama queen, or a weirdo, or a cry baby, but she had always been autistic.

My formative years were confusing, bewildering and, at times, traumatic. It seemed to me that everybody else had a secret handbook for how to be a person and I was the only one without a copy.

Not only did I have extreme sensory sensitivities, which included aversions to bright lights, loud noises, clothing textures, strong smells, and motion, but I was also constantly unwell with little ailments. I seemed to feel pain and sickness more intensely than other people. I was constantly exhausted and drained. I was physically weak and uncoordinated.

‘What’s wrong now?’ was a refrain I became depressingly used to, often delivered with a heavy sigh and an eye roll often followed by an encore of ‘can’t you just…?’ People started to assume I was putting things on for attention and, worst of all, they saw giving me the help and care I so desperately needed as capitulating to my drama.

I was scared of everything. The dark. Ghosts. Swimming underwater. Turning upside down. Witches (the Roald Dahl variety). Leslie Nielsen in Dracula: Dead And Loving It! You name it, I was afraid of it. I started to develop little rituals to cope with the terror. Avoiding the cracks in the pavement. Always having the radio volume on an even number. Tapping my head three times every time I worried a family member might die. Over the years, I’ve accrued nearly as many OCD tics as I have judgmental labels.

When I was 30, a family member with an autistic son casually mentioned to me that she thought I was autistic. At first I resisted the suggestion. My idea of autism was, well, Rain Man. And I was nothing like that. But she gently explained how autism can present in people who are socialized as girls and women—and how misogynistic preconceptions can be a barrier to diagnosis.

Excerpted from “What It’s Like to Get an Autism Diagnosis After Years of Being Called Difficult, Dramatic and Lazy” in Stylist. Read the full article online Sara Gibbs’ book, Drama Queen: One Autistic Woman and a Life of Unhelpful Labels, is available from national booksellers.

Source: Stylist | What It’s Like to Get an Autism Diagnosis After Years of Being Called Difficult, Dramatic and Lazy, https://www.stylist.co.uk/health/women-late-autism-diagnosis/536156 | Copyright © 2010–2021 Stylist