War, Crisis, Tragedy: How to Talk With Kids When the News is Scary 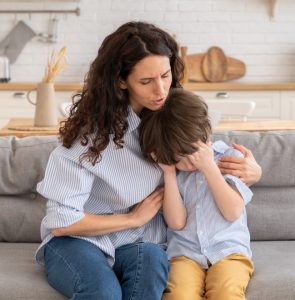 Hear what child development experts have to say about what parents, teachers and other caregivers can do to help prepare and protect kids from all the scary news out there, whether it’s fighting overseas, a school shooting, devastating wildfire or a global pandemic.

Limit their exposure to breaking news

For big stories, ask: “What have you heard and how are you feeling?”

While it’s important to limit your kids’ exposure to potentially frightening media, some stories are simply too big to avoid. And as kids get older, if they don’t hear about it at home, they’ll almost certainly hear something from classmates at school.

Tara Conley, a media researcher at Montclair State University, says adults should choose a quiet moment to check in with their kids, maybe at the dinner table or at bedtime.

The idea, she says, is to allow kids to “ask questions about what they’re seeing, how they’re feeling and what do they think.” In other words: Give kids a safe space to reflect and share.

Give kids facts and context

Holly Korbey, author of Building Better Citizens, a new book on civics education, says, “One of the most important things parents can do in this scary climate is to talk to kids about facts. For example: ‘No, there is not a draft, and no we haven’t started World War III.’ ”

Truglio says that if scary news is happening far from home, the best thing a parent or caregiver can do is to reach for a map. Then, she says, a child could “see distance, that it’s not in their immediate environment.”

When they ask why something happened, avoid labels like “bad guys”

Truglio says we should resist the temptation to label anyone “bad guys” or “evil.” It’s not helpful, and it may increase fear and confusion. Instead, she says, talk about people being in pain, being angry and making bad choices.

And according to Truglio, there’s one important thing parents shouldn’t be afraid to say: I don’t know.

“Look for the helpers”

Fred Rogers, the beloved children’s TV host, famously passed on this advice from his mother: “When something scary is happening, look for the helpers. You will always find people who are helping.”

Truglio did this when she talked to her then-young son about the 2012 Sandy Hook school shooting. The shooting happened on a Friday, and she kept him away from the television all weekend.

“We didn’t turn on the TV until President Obama spoke and there was a memorial service,” Truglio says. “We focused on the positive — how people were gathering and taking care of each other.”

“In talking with our children,” Conley says, “we also have to show them how we’re helping too, and asking them, ‘How do you see yourself as a helper in these situations?’ ”

You might consider bringing your child to a peaceful rally or protest, collecting donations together or writing to an elected official. A sense of agency can dramatically reduce a child’s anxiety.

Excerpted from “War, Crisis, Tragedy: How to Talk With Kids When the News is Scary” from KQED’s MindShift. Read the full article online, or listen to the podcast version of this article, for more strategies to help your child process scary news.

Source: MindShift | War, Crisis, Tragedy: How to Talk With Kids When the News is Scary, https://www.kqed.org/mindshift/59143/war-crisis-tragedy-how-to-talk-with-kids-when-the-news-is-scary | copyright 2022 NPR