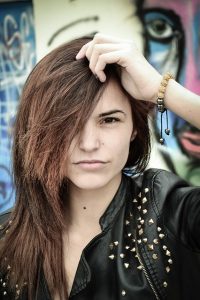 Researchers at the University of Illinois at Chicago in collaboration with colleagues from the University of Texas at Austin, have found that while many high school peer crowds and influences have remained constant over time, changing demographics, cultural influences and the increasing number of college-bound youth have led to the emergence of new peer groups and perceptions.

The study, which is published in the Journal of Adolescent Research, captured the perspectives and experiences of 61 recently graduated, ethnically diverse students through a series of semi-structured 90-minute focus groups. The participants, born between 1990 and 1997, were ages 19 to 26 and enrolled in two U.S. universities at the time of the focus groups, during which they were asked to describe the peer crowds that were most common in their high schools.

The researchers, led by UIC’s Rachel Gordon, audio-recorded and transcribed the discussions, then analyzed the data by coding themes from the students’ responses.

They identified 12 peer crowds and their positions in the social hierarchy. 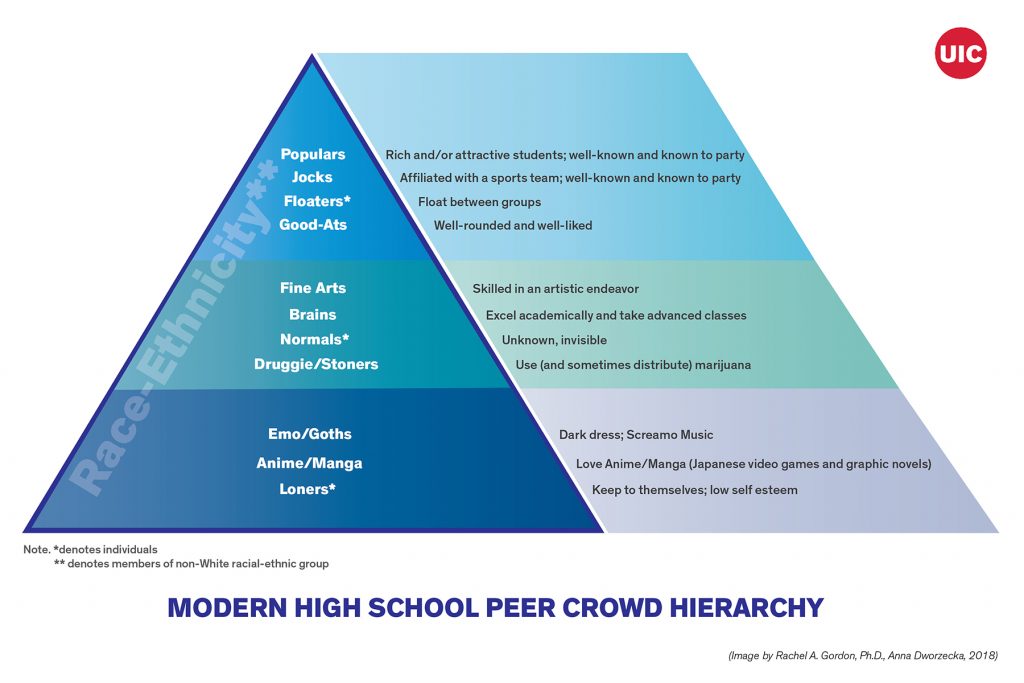 At the top of the social hierarchy are groups labeled “populars,” “jocks,” “floaters” and “good-ats.” In the middle the “fine arts” kids, who have risen in popularity compared with past studies, as well as the “brains,” “normals” and “druggie/stoners.” At the bottom of the social hierarchy are “emo/goths,” a new group of “anime/manga” fans and “loners.” The positioning of “race-ethnicity” groups varied depending on the participants’ background.

Gordon, the principal investigator of the study, said that many of their observations aligned with prior research; however, they also noted new themes that are unique to modern day adolescent experiences:

Academic anxiety is on the rise. The researchers observed that discussion about anxiety to meet parents’ expectations was “particularly novel,” especially for students described as “brains.” Gordon said the idea of stress related to academic performance was expected, but it was amplified when compared with prior studies and that this potentially reflects increasing competition for spots in top colleges. “Participants identified academic anxiety in more specific terms, even suggesting that students in the ‘brain’ peer crowd ‘were less mentally healthy’ due to a fear of upsetting their parents,” said Gordon, professor of sociology and a fellow of the Institute for Health Research and Policy at UIC.

Racial and ethnic stereotypes prevail, despite increasing diversification of schools. The researchers found that focus group participants often described those located at the top of the social hierarchy as white, and focus group discussions varied significantly based on the racial composition of the groups. “White participants tended to use racially coded language when describing other ethnic peer crowds,” Gordon said, “and this was particularly salient when compared to how black or Latino students described their experiences.” Participants of color, she said, were more likely to perceive “racial/ethnic” crowds as fluid and flexible, encompassing many different types of students who actually belong to another group, like “brains” or “jocks.” People of color perceived those of similar racial or ethnic backgrounds not as a group, but a “home base.”

Low social status adolescents reflect modern times, but high social status adolescents follow prior generations. The participants generally endorsed crowds that engaged in conventional activities valued by school and society, like getting good grades and participating in extracurricular activities, despite viewing “populars” and “jocks” negatively for their tendency to party and bully others. The “druggie/stoner” crowd was seen as gaining status by being in the orbit of these top crowds, due to supplying drugs for parties. Other groups were shaped by current events, popular culture and social media. Gordon highlighted three examples from the study:

Adolescents value well-roundedness. The researchers also observed the emergence of a “good-ats” crowd, whose members excelled across multiple domains and were considered to have “checked off all of the boxes needed for college applications,” Gordon said. They also saw that the “fine arts” crowd was elevated in the social hierarchy, relative to previous studies. Members of this group similarly reflected high levels of extracurricular engagement.

Gordon said these observations have implications for future research and understanding the short- and long-term effects these phenomena will have on life trajectories and future success.

“Adolescent peer crowds play an important role in determining short-term and long-term life trajectories on social, educational and psychological fronts,” said Gordon, who is also a senior scholar of the Institute of Government and Public Affairs at UIC. “Understanding how adolescents navigate their environments and perceive themselves and others can help us advance research in many areas, from how we can successfully promote healthy behaviors, such as anti-smoking or safe sex messages, to how we develop effective curriculums or even mediate the effects of school shootings.

“These findings provide novel and needed insights into the experiences of today’s young adults,” she said.

Co-authors on the study, which is funded by the Eunice Kennedy Shriver National Institute of Child Health and Human Development, one of the National Institutes of Health (R01HD081022), are Rowena Crabbe of Virginia Tech, Julia Bates of UIC, and Robert Crosnoe and Lilla Pivnick of UT.